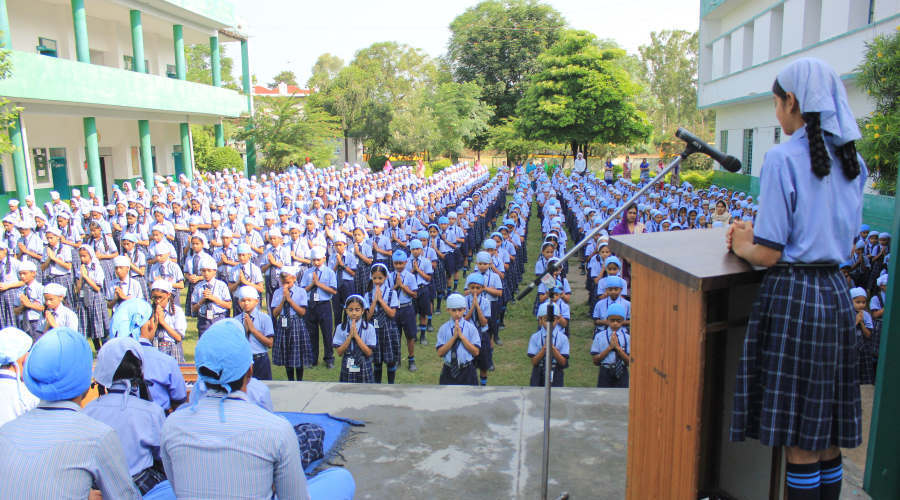 In 1958, this very school along with students was handed over to government and that school is now working as Govt. Senior Secondary School, Kang Mai. Grandfather. Shivsaran Singh Sidhu, B.A. (Hons.), B.T., L.Lb. worked as a headmaster of Khalsa High School, Purhiran Hoshiarpur from 1927 to 1945. In 1945 he was elected as M.L.A (Tanda). During that period he worked as president of S.G.P.C. (Hoshiarpur Unit). He was also the founder-principal of J.B.T. School, Khalsa High School, purhiran, Hoshirpur. Now the institution is at Ajowal and is known as DIET. The whole of Sidhu Family has an educational as well as martial background. Late Major Tarlochan Singh (Father) and Late Capt. Rajeshwar Singh Sidhu (Brother) served as n Indian Army. He laid his life for the sake of nation during his duties his on 21st Feb., 1981. This present Baba Manjh Convent School primarily started in the Gurudwara Sahib, Kang Mai on 1/4/1994.

The foundation stone of the school building was laid down by Bibi Surjit Kaur Kalkat the then Cabinet Minister, Technical & Industrial Training Punjab on 22/12/1995. The school got CBSE affiliation in 2003 for secondary & in 2006 for senior secondary classes. This school intends to provide golden opportunity to the children to gain high values of life through education, moral science, discipline & sport. It is providing education to children irrespective of caste laid on all round development of the children through academics & co curricular activities.